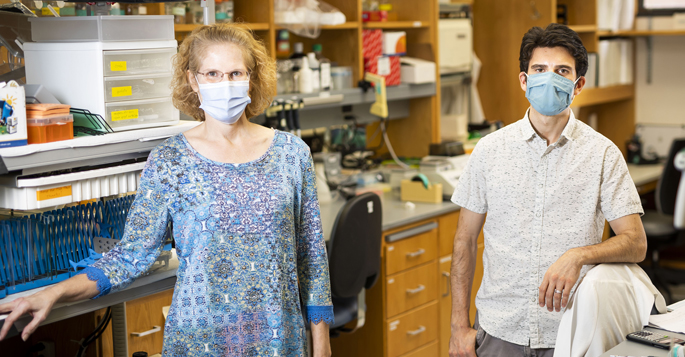 Michelle Southard-Smith, PhD, Aaron May-Zhang, PhD, and colleagues have created a molecular ‘atlas’ of genes expressed by the neuronal cells within the intestine that coordinate the functions of the gastrointestinal (GI) tract. (photo by Susan Urmy)

Researchers at Vanderbilt University Medical Center have generated the first comprehensive molecular “atlas” of genes expressed by the neuronal cells within the intestine that coordinate the functions of the gastrointestinal (GI) tract.

These neurons, which are a major component of the enteric nervous system (ENS), are clustered within interconnected structures called ganglia along the entire gut, from the esophagus to the anus.

They control intestinal motility, blood flow through the gut wall, and the release of peptides that influence various GI functions.

Disruptions in the function of enteric neurons contribute to disorders such as irritable bowel syndrome and gastrointestinal reflux disease. Hirschsprung disease, a developmental disorder of the ENS, is characterized by the absence of enteric neurons and intestinal blockage.

While different subtypes of enteric neurons have been identified, little is known about their gene expression profiles, distribution through the GI tract, or how much of the human ENS is shared by mice, an essential animal model for studying and developing new treatments for human disease.

The VUMC findings, published in the journal Gastroenterology, are “groundbreaking,” said the paper’s senior author, Michelle Southard-Smith, PhD, professor of Medicine and of Cell & Developmental Biology at Vanderbilt.

The atlas offers a foundation for future studies aimed at advancing the understanding and treatment of GI disease, she said.

Previous attempts at generating a “transcriptome,” or library of messenger RNA molecules expressed by ENS genes, have been hampered by the difficulty of extracting intact neurons embedded within the muscle layers of the gut wall.

The researchers used laser-capture microdissection (essentially a laser attached to a microscope) to isolate ganglia from human tissue sections of the duodenum and ileum, at the top and bottom of the small intestine, and from the colon.

Another technique, single-nucleus RNA sequencing, was used to capture nuclei from mouse intestine and sequence the RNA molecules inside the nuclei of the nerve cell. Based on these sequences, the researchers determined the subtypes of enteric neurons in different parts of the intestinal tract.

By targeting the collection of healthy, adult intestinal tissues, the VUMC study is the first of its kind to establish a baseline for gene expression and distribution of different subtypes of enteric neurons isolated from normal intestine of both humans and mice.

The researchers discovered markers of previously unknown neuron subtypes, identified differences in the expression of multiple human genes between males and females and determined commonalities and differences in subtypes of human and mouse neurons which will aid in the design and testing of therapeutic drugs for bowel diseases.

They also mapped variations in the locations of some neuron subtypes, suggesting that drugs could be developed to target specific subtypes in one intestinal region while leaving neurons in other areas unaffected.

This work was funded in part by National Institutes of Health grants OD023850 and DK103831.