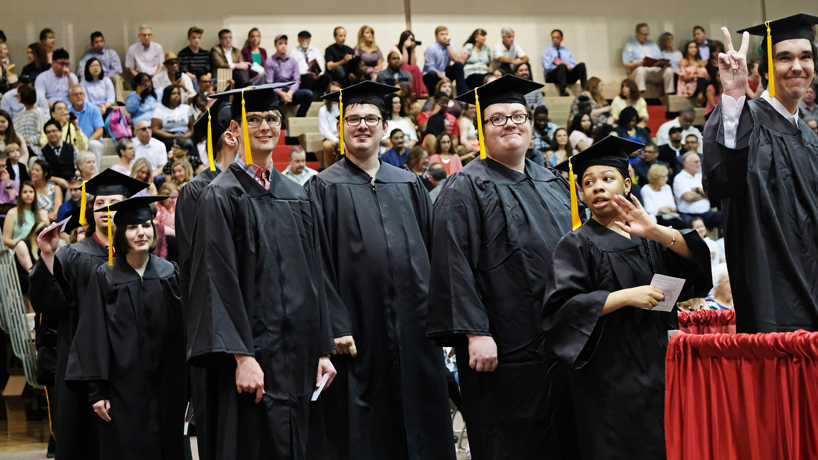 The Department of Education TPSID grant will go toward creating an individualized four-year program option for Succeed students, enhancing support and partnerships in existing programming and building statewide awareness and knowledge of postsecondary programs. (Photo by August Jennewein)

The UMSL Succeed Program at the University of Missouri–St. Louis has evolved steadily since its launch in 2013, growing from seven students to 69 this school year.

The two-year postsecondary program is designed to teach students with intellectual and developmental disabilities independent living, academic and job skills as they work toward a Chancellor’s Certificate or potentially matriculate to a degree program.

UMSL Succeed has pushed to expand options for students in recent years. This includes implementing the Succeed+ and Succeed Link programs, which support students with disabilities seeking degrees, and strengthening relationships within the UMSL community and local employers.

April Regester, associate professor of special education, and her co-principal investigators at UMSL have received $2.1 million in federal funding from a five-year Department of Education TPSID grant to expand the Succeed program even further.

Their project has three essential objectives: creating an individualized four-year program option for students, enhancing support and partnerships in existing programming and building statewide awareness and knowledge of postsecondary programs.

“I’m very excited,” Regester said. “This grant includes new, innovative ideas that will support the expansion and awareness of postsecondary education for individuals with intellectual and developmental disabilities in Missouri and beyond.”

“These grants are only given out every five years,” Lidgus said. “We missed out on it five years ago and did a lot of work on the UMSL Succeed Program and brought a lot of positive people on board. I could not be happier that we’re able to secure this grant but also to expand the program and improve access for so many more students.”

Bumble believes the grant will make it possible for UMSL to push the boundaries of postsecondary education. Most programs for students with intellectual and developmental disabilities are two years and have age restrictions.

UMSL’s program will change that with an option for a four-year pathway and open enrollment without an age limit.

“It’s really groundbreaking,” Bumble said. “In the world of postsecondary education, most programs across the country are capped at age 26. We wanted to mirror the population at UMSL, and we know that it’s a commuter campus with a lot of non-traditional students. We’re making sure that we’re extending those same opportunities to people with disabilities of all ages.”

Additionally, an innovative element of the four-year pathway will be tying it to an employment council and developing industry-specific credentials that align with students’ individual goals and existing UMSL degree programs. Athamanah and Lidgus emphasized that as an important step toward meeting employment needs in the region.

“Programs like ours have been developed not just for independence and social growth but for vocational growth so that students with intellectual and developmental disabilities aren’t underemployed,” Lidgus said. “This grant unlocks the ability for us to be able to explore the next step for those students in that vocational growth. So, when those students leave our program, they’ll be able to say, ‘I have a credential in this. I have a credential that any other traditional UMSL student would have.’”

The team will look to build on successful relationships the UMSL Succeed Program has already developed with partners on campus, such as the Recreation and Wellness Center, and off campus, such as the St. Louis Cardinals and the Cortex Innovation Community.

“Last year, before COVID, we had a 90 percent paid internship rate for our program,” Lidgus said. “So 90 percent of our students who had a 10-hour-a-week internship were paid – either on campus or off campus.”

The second objective will be to enhance the existing Succeed Program by deepening access and inclusion on campus and promoting greater involvement in the St. Louis community through outreach to alumni and local schools.

“We are going to start a peer mentoring program to promote more inclusivity at UMSL, pairing the students in the Succeed Program with other undergraduates to reach out and build more of a community,” Athamanah said. “We’re pushing for a better independent life and better quality of life for both students with and without disabilities.”

The final element of the project seeks to challenge preconceived notions of what’s possible for students with intellectual and developmental disabilities.

Regester said UMSL will develop a digital hub designed to raise awareness statewide of postsecondary programs like Succeed. The plan is to fill it with educational resources to engage parents, teachers and students, acclimating them to the idea of college.

“The postsecondary education awareness hub is a one-stop shop for practitioners, policymakers, family members and people with disabilities,” Bumble said. “The hub will support a culture shift as we advance the attitudes and awareness that are needed at the systems level to grow and sustain the postsecondary movement in Missouri.”

For the UMSL team, the grant affirms the work they’ve done since 2013 to advance the Succeed Program.

“We were able to start Succeed with a lot of support and buy-in from UMSL and our local community members and partners,” Regester said. “I think getting the funding solidifies for everyone involved that this is important work that is needed and that we’ve got a community at UMSL and with our partners in the state that is ready and willing to do the work. We’ve got some great support around us.”