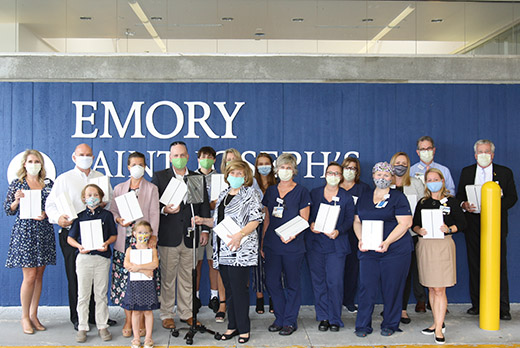 ATLANTA – During the time that Wayne Drye was hospitalized for COVID-19, his family spent hours each day talking to him, sending family videos and playing music and voice messages from friends, all through an iPad.

The family’s ability to communicate with their loved one and care team while not being physically with him at Emory Saint Joseph’s Hospital gave them the opportunity to still be a presence alongside him as he fought the illness, which ultimately took his life last spring.

In the weeks that followed, Drye’s family searched for a way to honor his memory and give thanks to the hospital and care team that helped facilitate those many hours of video chats during the 32 days that he fought the illness. What began as a plan to donate a small number of iPads to the hospital grew into a larger effort as more family and friends came together around the idea and contributed to the cause.

“Throughout Wayne’s hospital stay, our family witnessed the creative and innovative methods developed by the Emory Saint Joseph’s Hospital staff to help connect loved ones with patients during these extraordinary times,” says Mary Drye, his wife. “The hospital iPad that had served as a method to provide the communication and motivational audio to Wayne was a lifesaver for our family.”

The family purchased 47 iPads and 27 device stands capable of holding the devices at various heights with wheels that facilitate easy transport and storage, a donation worth more than $18,000.

“We are so thankful for this incredibly generous gift and the Drye family’s efforts to honor the memory of Wayne Drye in a way that will help support our efforts to connect our patients with their loved ones, as well as assisting in communication with their caregivers,” says Heather Dexter, CEO of Emory Saint Joseph’s Hospital. “These devices were a limited resource that needed to be shared across many patients. The Drye family’s donation will help ensure that this critical connection to family and friends is maintained for more patients during their time in the hospital.”

The iPads will be placed in care units throughout the hospital, and the rolling device stands will make the devices easier to use and provide extra portability.

“There are dozens of outstanding medical professionals who helped my dad and our family with countless hours on the phone for updates and continued requests to put the headphones back on and replay particular recordings that we had made for him,” says Rich Drye.

On Aug. 12, which would have been Drye’s 79th birthday, the family gathered at the hospital to deliver the devices and stands. Each iPad was engraved with one of Drye’s favorite sayings: “I feel healthy, happy and terrific.”

“For over a month, my father’s team of ‘frontline heroes’ risked their own health every day,” says John Drye. “The staff members of Emory Saint Joseph’s Hospital are extraordinary.”