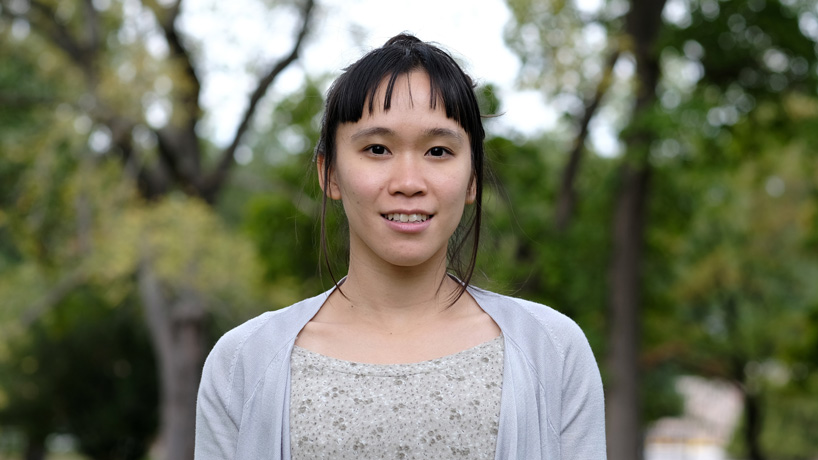 Amanda Wu is the recipient of Graduate Women in Science’s Nell Mondy/Jean Langenheim Fellowship. The honor comes with a $6,750 prize that will support genomic research on the maple-leaf oak, a rare species endemic to the Ozark Mountains of Arkansas. (Photo by August Jennewein)

Yingtong “Amanda” Wu didn’t have to go to some far-off tropical rain forest or Polynesian island to see biodiversity under threat firsthand.

Wu, a doctoral student in the Department of Biology at the University of Missouri–St. Louis, was walking through a wooded area at the edge of Ouachita National Forest in the Ozark Mountains of western Arkansas in the summer of 2019.

She remembers standing in almost the same spot the previous fall, looking to her left at the top of the next hill, thick with trees. But, by 2019, it had all been cleared, the remnants of the forest lying in logs on the bare land.

“I realize people need to live, people need to convert the land for logging or planting,” Wu said. “But it’s kind of sad seeing nice, big oak trees getting cut down.”

Wu understood better than most the potential consequences of that scene. There are more than 400 species of oak trees in the world, including approximately 90 species in the United States, but not all of them are in abundance. Some, such as red and white oaks, can be found lining streets of neighborhoods of the eastern and central parts of the country, but others exist in only tiny pockets of land.

Maybe as tiny as four hilltops in the Ozark Mountains.

That could be the full range of the maple-leaf oak – Quercus acerifolia – that Wu has made the focus of her doctoral research.

“It’s a really, really rare plant species, but it’s a mystery because a lot of botanists and foresters that I’ve talked to don’t really know if this is a species or not,” Wu said. “It kind of looks like a different species. We don’t know if this is a weird variety.”

Wu is trying to solve that mystery and, in the process, gain a better understanding of how rare species can be maintained in the wild.

Her efforts recently got a boost when Graduate Women in Science – an international organization working to connect, lead and empower women in science – awarded Wu one of seven national fellowships to support her research. The Nell Mondy/Jean Langenheim Fellowship includes a $6,750 prize that she intends to use for genomic research that will help her learn about the maple-leaf oak on a molecular level and not only know more conclusively about their range but also how they evolve and maintain in the wild.

“My general research question started from thinking about rare species and rare plants,” Wu said. “That aligned with what my supervisor – Bob Ricklefs – is interested in. He wanted to know why some species are rare and why some species are widespread. That’s a basic biogeographic question.”

Wu had been searching rare plant species on the internet to try to narrow her topic when she first learned about the maple-leaf oak. She found some research from the 1980s and 1990s about this oak, but nothing used today’s more advanced genetic technology to establish definitively that it is a distinct species.

She thought she might be able to fill in the gap, and it didn’t hurt that the tree was growing less than an 8-hour drive from the UMSL campus.

Brent Baker, a botanist with the Arkansas Natural Heritage Commission, is just one of the other scientists who’ve helped her locate the trees and collect samples of leaves and acorns for morphological analysis.

She has another trip to Arkansas scheduled this fall to gather additional samples she hopes to send to a company lab for DNA sequencing.

“I’m looking forward to seeing the data and finding out what kind of story it tells,” Wu said.

Her interest in plants and plant diversity goes back at least to her experience as an undergraduate studying biology at Sun Yat-sen University, located in Guangzhou, a sprawling city on the southern coastline of her native China.

Wu was in the last year of her undergraduate program and starting to think about pursuing a PhD when Ricklefs – now a Curators’ Distinguished Professor Emeritus and a noted ecologist and ornithologist – paid a visit to Sun Yat-sen and gave a lecture about the distribution of birds and biogeography. She was captivated by the talk and decided to send him an email, never expecting a reply.

But Ricklefs did answer, beginning a relationship that has brought Wu halfway around the world.

She had been looking into other doctoral programs in English-speaking countries, including the United Kingdom, Canada and the United States.

Hearing from Ricklefs prompted her to add UMSL to her list of schools under consideration, and the more she looked into the biology program and read about the Whitney R. Harris World Ecology Center, the more appealing an option it became.

“The promotion for inclusiveness of tropical biodiversity and having all those international students coming over to study I think was one of the main attraction points for me,” Wu said.

She was drawn to the connections to the Saint Louis Zoo and Missouri Botanical Garden through the Harris Center.

The Garden has proved to be a great resource for her doctoral research because it has scientists and fieldworkers who have experience working with the maple-leaf oak and propagating them in a greenhouse. Wu also was given access to one of the Garden’s SUVs and had the assistance of some staff while conducting some of her fieldwork in Arkansas.

Though she has more fieldwork to do, Wu has already started working on her dissertation, and she hopes to complete its defense in time to graduate in 2022.

Once she’s earned her PhD, Wu hopes to continue her research on the maple-leaf oak and other rare species, either in an academic position or as a researcher at a botanical garden.

“I’d be interested in doing the groundwork to conserve a rare species, propagating the individuals and reintroducing them to their own native ranges or maybe putting them in a botanical garden and doing the educational work or public outreach work on rare plants,” Wu said. “That would be really cool.”