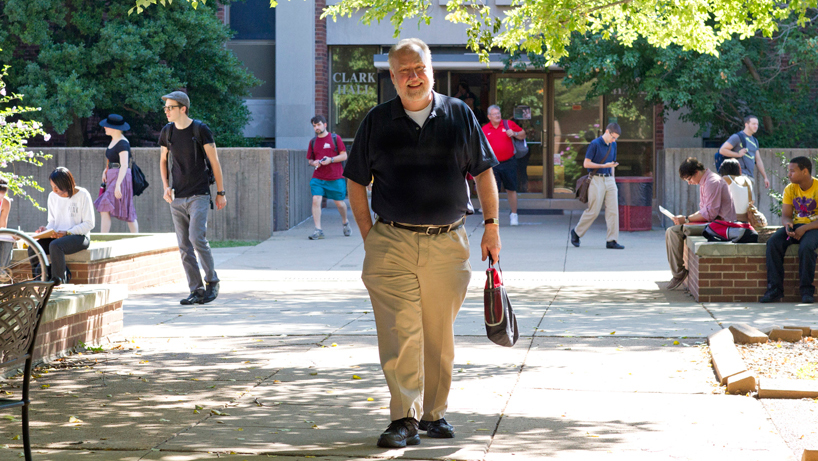 Dave Robertson was a nationally recognized scholar of American political development as well as a beloved teacher who inspired thousands of students over 37 years at UMSL. (Photo by August Jennewein)

David Bryan Robertson, a Curators’ Distinguished Teaching Professor Emeritus in the Department of Political Science at the University of Missouri–St. Louis, died Wednesday, Oct. 7, from complications of pancreatic cancer. He was 69.

Robertson, a nationally recognized scholar of American political development, was an oft-quoted voice on politics across the state of Missouri and beyond, particularly this time of year with election season in full swing. He provided regular analysis on the pages of newspapers around the country and on the airwaves of KSDK (Channel 5), where he served as a political analyst from 2000 to 2018.

He was also a beloved teacher, sharing his passion for politics and government with legions of students throughout 37 years at UMSL. He inspired thousands of undergraduates in the introductory American government course, fostered hundreds of baccalaureates in his advanced courses on environmental policy and federalism, and nurtured tens of doctoral students. Among his many career honors were the Governor’s Award for Excellence in Teaching in 2001 and the Chancellor’s and Emerson Electric Awards for Excellence in Teaching in 2002.

“Dave Robertson was a beloved colleague and leader at UMSL and in the Department of Political Science,” Professor David Kimball said. “In addition to being a great scholar, teacher, and mentor, Dave was a kind and generous person.”

“I took his Environmental Politics course my first semester at UMSL,” former student Sadie Britt said. “The class was engaging and intriguing. I thoroughly enjoyed his corny, pun-filled jokes. He will be greatly missed.”

Robertson was raised in Chicago and attended college at the University of Wisconsin–Madison, receiving his bachelor’s degree in political science in 1975.

He went on to earn a PhD in political science from Indiana University in 1981 and landed his first faculty position that same year at the University of Texas–San Antonio.

Robertson came to UMSL as an assistant professor in 1983. He earned tenure in 1989, was promoted to full professor in 2001 and received his appointment to Curators’ Distinguished Teaching Professor in 2008. He chaired the Department of Political Science form 1998 to 2001 and again from 2015 until this past August.

He also served as associate editor of the Journal of Policy History from 1991 to 2019 and for 21 years edited CLIO, the American Political Science Association’s politics and history newsletter. He was a founding member of the Scholars Strategy Network, an organization of scholars “committed to using research to improve policy and strengthen democracy.”

Robertson was a pioneer in placing American political institutions in their historical context and authored or edited seven books, including “Federalism and the Making of America,” “The Original Compromise: What the Constitution’s Framers Were Really Thinking” and “The Constitution and America’s Destiny.” His American Political Science Review article, “Madison’s Opponents and Constitutional Design,” won the 2006 American Political Science Association award as the best article on politics and history.

Robertson retired on Sept. 1 and had moved to Arizona.

He is survived by his wife, Cathie, to whom he was married for 47 years, as well as his son, Bryan, daughter-in-law, Elizabeth, and grandson, Hunter.

Funeral arrangements in Arizona are still pending. Donations can be made in Robertson’s memory to the Cystic Fibrosis Foundation or an UMSL scholarship the Department of Political Science is establishing in his name.

The Department of Political Science is also planning a future event to honor Robertson’s life and career.