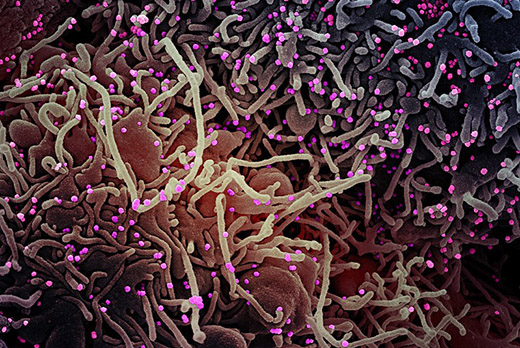 There’s been a lot of buzz about antiviral monoclonal antibodies for COVID-19. Giving a COVID-19 patient a monoclonal antibody essentially is a short cut: providing the body what another immune system — and researchers — have already refined and optimized.

Emory investigators are testing several of these drugs, including ones developed by Regeneron and Eli Lilly. Some studies are focused on the impact of these drugs on patients who are severely ill while others are looking at outpatients with COVID-19. A couple are testing whether the antibodies can be used prophylactically to prevent disease spread.

We asked two Emory experts, Drs. Sri Edupuganti and G. Marshall Lyon, to provide some background on monoclonal antibody therapy and its uses.

What are monoclonal antibodies?

Antibodies are proteins in our blood that defend us against infections. Monoclonal means that the antibodies are all the same, and only recognize one entity — in this case, part of the SARS-CoV-2 virus. The antibodies directed against SARS-CoV-2 are selected for their ability to neutralize the virus, often because they target the spike protein on the outside of the virus.

In contrast, the antibodies made by someone’s immune system naturally are an assortment or polyclonal — they’re not all the same. Monoclonal antibodies come from taking a single immune cell and copying it in a laboratory.

How are they administered?

Usually, intravenous infusion, meaning they need to be given at a doctor’s office rather than at home. A more recent trend is to administer the drug subcutaneously (under the skin), which is more convenient and can be given in multiple clinic settings.

Where do they come from?

Monoclonal antibodies against SARS-CoV-2 can come from human patients who have recovered from COVID-19, or from mice genetically engineered to have a human immune system and immunized with viral proteins. The antibodies need to be “humanized”, otherwise human immune systems will see them as foreign and try to fight them off. Scientists use large cultures of Chinese hamster ovary cells to produce monoclonal antibodies in bulk.

What other conditions are they used for?

Several of the top-selling drugs in the world are monoclonal antibodies, and are used to treat cancer or autoimmune disorders. This is because scientists have figured out how to create monoclonal antibodies directed against particular proteins in the body, soaking them up or blocking their function. This approach is most effective when the target protein is in the blood or on the surfaces of a specific group of cells.

What about other viral or bacterial infections?

Researchers have developed monoclonals against Ebola and anthrax. An early commercial monoclonal, palivizumab, was against RSV (respiratory syncytial virus), a common cause of respiratory illness in children. Recently, one has been in clinical trials for HIV prevention.

It is important to note that viruses mutate so the antibody, even if it was carefully selected by scientists, does not bind to the hostile agent as well. A way to prevent this is to pick two or three — a “cocktail” — so that even if a virus mutates in one spot affecting the ability of an antibody to grab it, the others will still do the job. The experimental therapy given to the president, developed by the pharmaceutical company Regeneron, is a mixture of two monoclonals for this reason. One of Eli Lilly’s medications, which is currently in clinical trials, is also a mixture.

What’s the status of these monoclonals against SARS-CoV-2?

Neither Regeneron’s nor Lilly’s products have been approved by the Food and Drug Administration (FDA) for general use — Regeneron’s was provided to the White House in response to a compassionate use request by the president’s doctors. Both companies have reported encouraging results and have filed for emergency use authorization with the FDA.

Below is a list of some of Emory’s monoclonal antibody clinical trials for COVID-19.