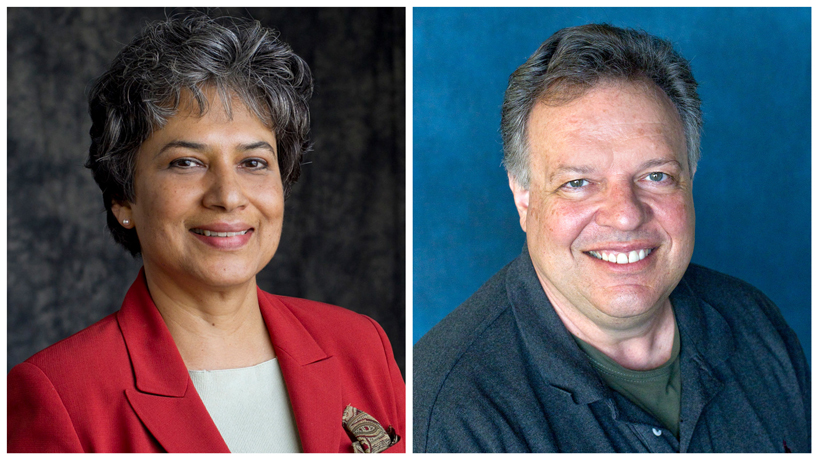 The Board of Curators of the University of Missouri recognized Professors Uma Segal and R. Rocco Cottone, elevating them to the most prestigious ranks in the UM System. (Photos by August Jennewein)

Uma Segal, professor of social work at the University of Missouri–St. Louis, is an expert on immigrant and refugee populations and global migrations.

R. Rocco Cottone, professor of counseling and family therapy, is a renowned counselor who has previously been named a fellow by the American Counseling Association.

The Board of Curators of the University of Missouri recognized the professors further, elevating them to the most prestigious ranks in the UM System. At its Sept. 24 meeting, the board voted unanimously to appoint Segal and Cottone to serve as Curators’ Distinguished Professors.

Each appointment covers a period of five years but can be extended at the discretion of the chancellor.

Segal previously won a J. William Fulbright Award to establish a new school of social work in India and has been called on by the government of Portugal to consult on the country’s developing refugee integration program.

She has also published six books on the subject of immigrant and refugee studies and served as the editor-in-chief of The Journal of Immigrant & Refugee Studies.

“To know that one’s work has made a difference is extremely rewarding, to enjoy what one does professionally is a real privilege and to be recognized by peers and colleagues is the ultimate accolade,” Segal said. “I thank the School of Social Work and the University of Missouri–St. Louis for nominating me for the Curators’ Distinguished Professorship, and I am truly honored by the strong support of several academics in the United States and abroad.”

This past spring, he was also the subject of an academic article honoring his contributions to counseling in The Family Journal: Counseling and Therapy for Couples and Families.

“I am so honored by being named a Curators’ Distinguished Professor,” Cottone said. “As the first college graduate of my family, as the grandson of immigrants and as a native Missourian, I am so proud to have my work recognized by the University of Missouri Curators. So many people helped me along my academic journey – family, friends, teachers, colleagues and mentors – and I recognize their contribution to any accomplishments I claim. I want to thank them and honor them as I am honored by this award.”