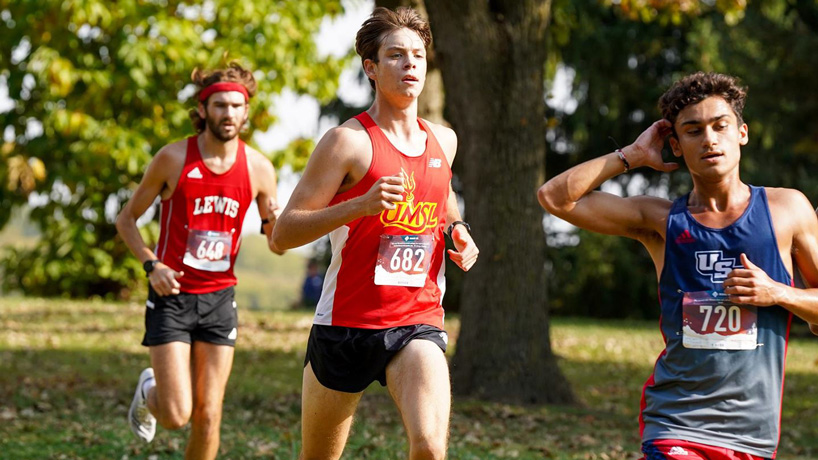 Freshman Benjamin Vandenbrink (center) paced the Tritons cross country team in its season debut in the GLVC East Divisional meet, finishing 48th overall. It was the first meet for an UMSL men’s program that had been dormant since 1983.

Steve Picucci knew when he accepted the job as the head track and field and cross country coach at the University of Missouri–St. Louis last fall that he’d be waiting roughly a year for his new programs to begin competition.

He had not counted on the need for his first fall schedule to be rewritten because of the COVID-19 pandemic and couldn’t have imagine the coronavirus leading to the cancellation of another meet, further delaying the start of the season.

That had to make it all the more sweet for Picucci to watch his cross country runners lining up Saturday at the start of the Great Lakes Valley Conference East Divisional meet, hosted by Illinois Springfield.

The Tritons understandably struggled in races against more seasoned runners, finishing fifth out of five teams in the men’s 8-kilometer race and sixth out of six team’s in the women’s 6-kilometer race. But it was just important to lay down a baseline on which to build.

Freshmen Brett Lynch, Gavin Love and Sean Ede and sophomore Will Cytron rounded out UMSL’s top five finishers. Freshman Kennedy Moore, sophomore Alex Becker and softball players Haley Lamberson and Corinne Daley made up the rest of the top five on the women’s side.

“All those freshmen, they had their senior track seasons taken away from them,” Picucci said, referring to the impact of the pandemic. “They were just excited to get onto something new and move on from that loss of the high school season. They were really fired up and trained hard.”

The hard work is only beginning as the new programs look to take root. They are next scheduled to compete in the GLVC Championships on Oct. 24 in Elsah, Illinois.