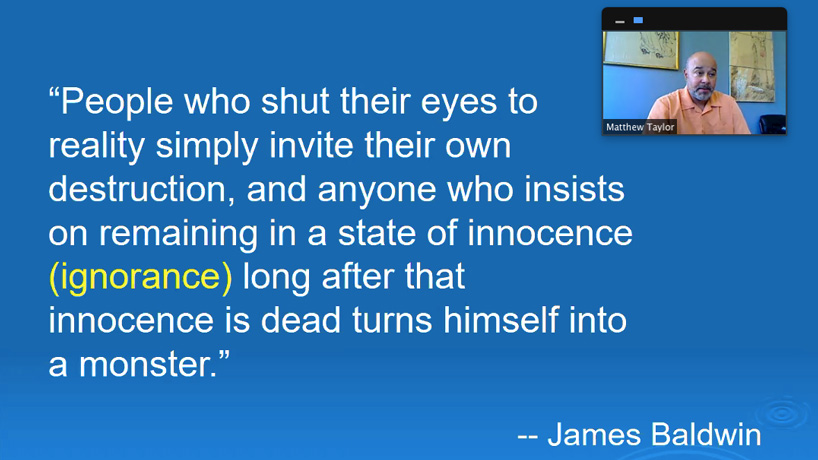 Associate Professor Matthew Taylor pointed to words from author and activist James Baldwin during a discussion of how African Americans must face the anxiety that they feel in the face of racism. (Screenshot)

Black Lives Matter protests spread throughout the United States earlier this year after the death of George Floyd under the knee of a police officer in Minneapolis.

They were watched closely not only in this country but around the globe, including in Germany, with its own painful history of discrimination.

Liane Constantine, interim director of UMSL Global at the University of Missouri–St. Louis, had already been working with counterparts in Stuttgart, Germany, to plan ways to commemorate the 60th anniversary of the establishment of St. Louis and Stuttgart as sister cities. But, in the wake of Floyd’s death, colleagues in Stuttgart approached her about facilitating discussions about racism and injustice.

“Race and Racism: A Transatlantic Dialogue” kicked off last week with the first of four 90-minute virtual lectures planned between Oct. 8 and Dec. 4. This series is being sponsored by St. Louis-Stuttgart Sister Cities, Deutsch-Amerikanisches Zentrum in Stuttgart, the City of Stuttgart, UMSL’s German Culture Center and UMSL Global.

“Our university has welcomed this opportunity,” Constantine said as she welcomed an audience of between 50 and 60 individuals to the live webinar. “We’re excited about this lecture series, which intends to provide lots of opportunity for questions, discussions and intercultural learning.”

She turned the screen over to Matthew Taylor, an associate professor in the Department of Psychological Sciences and the associate dean for faculty affairs in the College of Arts and Sciences, to lead last week’s discussion.

Taylor, a clinical psychologist who researches minority mental health, talked about the anxiety that has grown throughout the turbulent summer on top of several years where overt racism and nationalism has appeared on the rise across America.

Of course, African American communities have been marginalized far longer.

“You could almost pick any historical era for racial and ethnic minority groups in the United States, and you could argue that at some point, some element of the experience has been undesirable and frightening,” Taylor said. “At some point, people have been dehumanized.”

Taylor spoke about the impact of government policies that he believes either leave African Americans out or land harder on them.

“You have a large group of folks that are not perhaps overtly racist but that benefit from those policies,” Taylor said. “They don’t feel the sting of them and don’t feel the need to speak out. They’re very silent and complicit. And this is, I think, a larger group than we thought existed in the United States here. To me, this is probably the most disturbing thing.”

Persisting through those circumstances is challenging and can take a toll on one’s psyche.

He stressed the importance of recognizing the world as it exists and staying attune to one’s feelings. He said trauma does not have to define one’s identity, but there are ways to use it as motivation to work for change. He urged self-care, whether it’s staying away from social media or other triggers that might prove harmful.

Taylor also had a message for would-be allies. He said they also need to be aware of the tangible impact of race for many of their fellow citizens and the way it permeates so much of their daily lives. He also asks that they not get defensive or personalize the anger that marginalized people feel but try to partner with African Americans to address injustice.

There are three other lectures planned as part of the series, each one beginning at 11 a.m. central time:

Shea Kerkhoff, assistant professor in the Department of Educator Preparation and Leadership

In this session, Kerkhoff will discuss the ways racism has infiltrated the U.S. school system. The talk will introduce implicit bias and how teachers may unconsciously reproduce racial hierarchies in classrooms. We will also discuss how structures and policies systemically hold racism in place as the status quo in U.S. schools. The session will end by exploring ways to dismantle racism and rebuild a racially just school system.

“Racial and Spatial Injustice in the St. Louis Metropolitan Area”

In a truly just metropolis, where you grew up would not influence your life chances. Racial and economic segregation in the St. Louis metropolitan area means that many children grow up in neighborhoods that give them little chance of succeeding. The pattern of concentrated poverty and racial isolation in the city and inner-ring suburbs is not simply the result of individual choices; it is the result of a tangle of public policies and private practices. To create a more just and prosperous metropolitan area, new policies and practices must address spatial and institutional inequalities.

“The Important Role the Office of Diversity, Equity and Inclusion holds at an American University – More Relevant than Ever”

Stevens will discuss the role of an equity and diversity office and its staff at institutions in the United States, as well as explore related challenges. She has worked to establish and strengthen collaborative partnerships across the institution to enhance diversity, equity and inclusion initiatives. Stevens coordinated the campus’ participation and engagement in the Equity Institute sponsored by USC Race and Equity Center and is committed to creating an inclusive environment at UMSL.