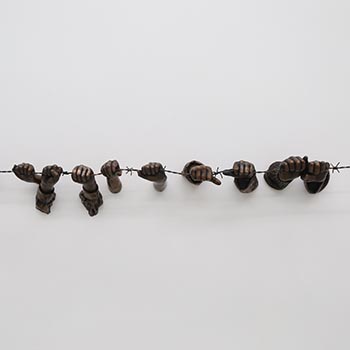 Hank Willis Thomas, “If the Leader Only Knew,” 2014. Courtesy of the artist and Jack Shainman Gallery, New York.

If you’re going to reimagine something like the U.S. prison system, what better way to do it than to invite creatives like musicians, poets, filmmakers, and visual artists to join scholars and intellectuals in the work?

That’s the idea behind an ambitious year-long project designed to address prison and policing issues organized by the UC Santa Cruz Institute of the Arts and Sciences. The upcoming two-part project, titled Barring Freedom and Visualizing Abolition, will feature:

The Barring Freedom exhibit will be on view at the San Jose Museum of Art Oct. 30–May 2021 and at the John Jay College of Criminal Justice in New York in fall 2021.

The Visualizing Abolition discussion and film series launches online Oct. 20 and continues until May 18, 2021.

“For me, this is exciting because it is a multimedia event with an amazing set of creative people who are going to be able to come together around a central issue of our time,” said UC Santa Cruz Associate Professor of Feminist Studies Gina Dent, who is a longtime prison abolitionist. “I’m so much looking forward to the dynamic exchanges and to see what comes out of it; to have the series be a creative production in and of itself.”

Birth of an exhibition

While the idea of setting up a program around prisons, policing, and justice seems especially timely, the genesis of the project actually began four years ago during a discussion between UC Santa Cruz Professor of Sociology Herman Gray and Interim Director of the Institute of the Arts and Sciences Rachel Nelson. In a conversation about how prevalent issues of prisons and policing had become within contemporary art after the police killings of Eric Garner, Michael Brown Jr., and Tamir Rice, among others, the idea of an exhibition was born.

“Not only is it a subject that particularly concerns the U.S. right now and when the exhibition was conceived,” Nelson said by telephone from her home, “but also because UC Santa Cruz has long been a place where art, research, and activism around prisons has flourished.”

Faculty and students, including Davis and Dent, for instance, were part of the founding the Critical Resistance movement, which is now a nonprofit organization advocating for prison abolition and better conditions inside prison walls. They helped organize the first Critical Resistance conference in 1998, which, according to Dent, is often characterized as the beginning of a new generation’s activism against the U.S. prison system.

And, in 2000, UC Santa Cruz was the site of the Incite! Violence Against Women of Color conference, which drew 2,000 people and highlighted the voices of women of color activists addressing issues of violence, immigration rights, and prison proliferation.

It is also the home of Psychology Professor Craig Haney, who has spent four decades studying the damaging psychological effects of imprisonment and solitary confinement. Not only has Haney testified before a U.S. Senate judiciary subcommittee about his research, but also his 2018 testimony in a Vancouver courtroom helped lead to a landmark Canadian court ruling that prohibited solitary confinement in that country, according to newspaper reports. Haney has acted as both an advisor and participant in the project.

For Dent, who also spoke by phone from her home, the art installation and online speaking events are a continuation of her life’s work. Studying the way in which the United States’ punishment-based carceral system has invaded much of our life—from TV shows and movies to corporations that profit off prisons and even parenting styles—she sees the push to abolish prisons as a continuation of the anti-slavery movement.

“All of the (prison) abolition work has been inspired by the anti-slavery abolitionist cause,” Dent said. “It has always been our view that we could imagine a future without prisons if only we could draw on the way our ancestors imagined a world without slavery.”

But it’s no easy task, which is why UC Santa Cruz organizers are bringing in a wide range of people to tackle the topic.

Helping us see and hear differently

A participatory sculpture of a solitary confinement cell surrounded by a garden visualized by a death-row inmate is also part of the event. Created by artist jackie sumell, the Solitary Garden piece sits on campus and asks visitors to imagine a landscape without prisons.

“We can’t imagine a future different than the present without involving our best creators,” said Nelson. “Some of our academic friends are those people, but I am also so excited to be working with people—artists, musicians, and others—who are in the business of helping us see and hear differently.”

Both Dent and Nelson hope the programming will appeal to a broad range of people, including students. Not only will some classes at UC Santa Cruz be incorporating the programming into their lesson plans, Nelson said, but also the campus also has created a partnership with Howard University School of Law, the oldest historically Black college or university law school in the United States. Students from both universities will have the opportunity to view two of the scheduled conversations, followed by their own joint discussion, according to Nelson.

And, the project will have lasting effect. Alexandra Moore, co-curator of Barring Freedom and IAS graduate curatorial fellow, has worked with a team of graduate students on a website that will be both archive and educational resource. The site, barringfreedom.org, will launch Oct. 30 to coincide with the opening of the exhibition.

Both Nelson and Dent see the programming as hopeful.

“The pandemics of COVID-19, racist violence, and prisons are certainly with us, but abolitionists are always living with hope inside these moments and structures,” Dent said. “When I’m asked about the difficulty of being Black in the U.S., I always point to the joy of living and being a scholar of that experience; and I am always aware that things can change.”

For more information, the online event schedule, and registration visit the Institute of the Arts and Sciences’ Barring Freedom page.