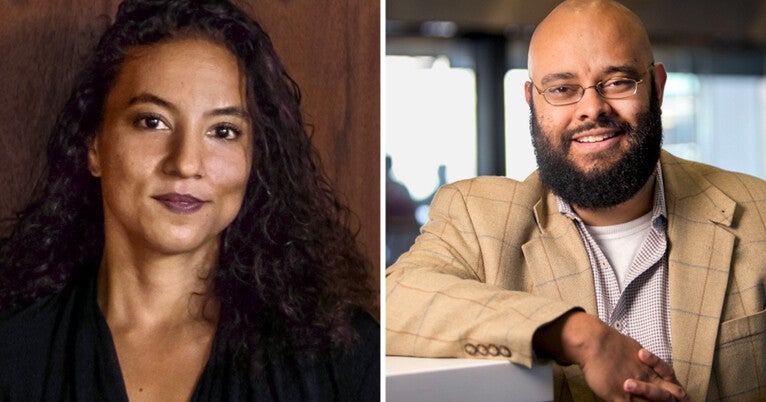 Elizabeth Hinton and Phillip Atiba Goff have been crossing paths for a long time.

With a mutual interest in policing, racial injustice, and criminal reform, Hinton, a historian, and Goff, a social psychologist, have often collaborated professionally. But until now, they’d never held permanent faculty positions on the same campus.

The two scholars and friends, who joined the Yale Faculty of Arts and Sciences (FAS) this summer, are glad they finally do, especially at a moment when the nation is urgently grappling with issues they’ve been thinking about deeply for a long time.

“Since the killing of George Floyd, all of our work around those issues is even more pressing and relevant,” said Hinton, who comes to Yale from Harvard University and is an associate professor of history and African American studies with a secondary appointment in Yale Law School. “There is a new recognition of and importance to coming to terms with our history, the history of repression and targeted enforcement in communities of color. The protests and national discussions happening about systemic racism — but also about the purpose and function of policing — really make this a potential watershed moment.”

The two scholars, who first met at Harvard (where Goff earned his Ph.D.), had been “trying to recruit each other” for years, said Goff, a professor in the African American studies and psychology departments who comes to Yale from John Jay College of Criminal Justice in New York City. Meanwhile, they worked together on various projects centered on policing.

Earlier this year, for example, they formulated a five-step policy plan for police reform, presented as recommendations to the original field of 2020 presidential candidates. This work was done through Yale Law School’s Justice Collaboratory, an interdisciplinary group committed to criminal justice reform, and the Center for Policing Equity (CPE), a nonprofit research and action intervention organization co-founded and led by Goff, which uses science to identify and reduce racial disparities in law enforcement. Goff is relocating CPE from New York to New Haven, and he will continue to work with police departments and activists in the U.S. and internationally to improve and re-imagine public safety.

“It is thrilling that Elizabeth Hinton and Phillip Atiba Goff have joined the Yale faculty,” said Tamar Gendler, dean of the FAS. “Each is a renowned scholar and teacher whose pathbreaking research has shaped the national conversation. They join colleagues from across the FAS — in African American studies; American studies; economics; English; ethnicity, race, and migration; history; philosophy; sociology; and other departments — whose work within and across multiple disciplines has illuminated and transformed our understanding of race, policing, and mass incarceration.”

It was Yale’s supportive environment that convinced Goff to join the faculty.

“There are some places that have a great collection of scholars working on race and criminal legal systems, but there is no place that has a better collection of people doing that work who also like each other, engage with each other, and collaborate on work they support,” he said.

Hinton, who previously taught in Harvard’s history and African American studies departments, is considered one of the nation’s leading experts on criminalization and policing. She focuses her research on the persistence of poverty, racial inequality, and urban violence in the 20th-century United States, and is the author of the 2016 book “From the War on Poverty to the War on Crime: The Making of Mass Incarceration in America.” In the book, she argues that the carceral state was built over decades, beginning during the civil rights era of the Johnson administration.

Her interest in mass incarceration began as something personal: Her own family members spent time in prison.

“I grew up in the 1980s and 1990s, so I really witnessed firsthand the impact of mass incarceration and the ‘war on drugs’ on my family,” she said. “When I went to visit prison for the first time, I was astounded by what I saw. After going in the ‘family room’ — and going through the process of criminalization that family members do when they visit loved ones in prison — I saw generations of mostly Black and brown men who were serving severe sentences, which didn’t necessarily fit their crimes. I just thought: ‘Oh my god, how did this happen?’ I really wanted to find out.”

Hinton said she discovered “a historiographical gap between the legacy of the civil rights movement and the mass incarceration, policing, and criminalization” that emerged in the late 20th century.

“We didn’t have a firm sense of the ways in which policies that were ostensibly race-neutral emerged after the civil rights movement that had these incredibly racist outcomes,” she said.

Her scholarship has shed light on it, and at Yale she will teach a spring 2021 Yale College course on “Urban Inequality After Civil Rights” and a fall 2021 undergraduate lecture class on the history of mass incarceration in the United States. In the context of current events, she said, the civil rights course will differ from versions she’s taught previously. “Both COVID and the George Floyd protests have underscored where we are in terms of decades of policies that have exacerbated inequality in America since the 1960s,” said Hinton.

While she resists calling herself an activist, Hinton said she believes her work “helps to inform social movements.”

In addition to her scholarly projects, Hinton is the faculty director of the Justice Collaboratory’s Million Book Project, which brings curated books to U.S. prisons and juvenile detention centers, and she plans to teach in the Yale Prison Education Initiative, which offers credit-bearing courses to incarcerated individuals in Connecticut.

Racism is behavior, not attitude

Goff has conducted pathbreaking work in the science of racial bias, revealing through experiments how individuals learn to associate Blackness and crime — which, he noted, “can have deadly consequences in the context of policing.”

His original dream was to be a bassist for the singer Prince. Although initially torn between the “storytelling of music” and “storytelling with statistics,” Goff said the latter interest won out when, as a psychology graduate student, he pursued a project related to the 1999 New York City police killing of Amadou Diallo.

“It wasn’t just an awful shooting, but the officers uniformly said they saw a gun, when what they saw was a wallet,” recalled Goff. “That is the kind of cognitive visual error that can be reproduced in a laboratory in addition to out in the world.”

In the lab, Goff learned something that shocked him: Not only did study subjects associate Blackness and crime, they associated Black people with monkeys.

“That means that some part of their brain says that Black people are not fully human,” he said. “There are consequences to that for behavior, not only in law enforcement, but in education, employment, and so on.”

In 2008, while working on a policy memo for then-presidential candidate Barack Obama, Goff searched for statistics on racial disparities in police brutality but had difficulty finding any data. He recruited his mother, a librarian, to help. After hunting for 13 hours, Goff said he knew the statistics he was seeking didn’t exist.

It was after that that I realized the scale of the problem was so large that I was going to be doing this work forever.

“It was after that that I realized the scale of the problem was so large that I was going to be doing this work forever,” he said.

While at the University of California-Los Angeles, Goff co-founded CPE, which now hosts the world’s largest collection of police behavioral data in its National Science Foundation-funded National Justice Database. The database, for which Goff is a principal investigator, serves as a scientific tool to help reduce inequitable policing, such as racial disparities in police stops and use of force.

Goff has worked with police departments all over the world to help them be more fair and less deadly. This includes collaborating with six U.S. police departments as part of the Department of Justice-funded National Initiative for Safe Communities, which seeks to improve police/community relationships, in part through a reconciliation process for addressing past harms.

An essential part of Goff’s work has been redefining racism. He argues that while people typically think racial discrimination stems from explicit or implicit attitudes, it is behavior, rather than attitudes, that results in racially unequal outcomes.

“We tell ourselves the story that racism is about our hearts and minds, I think because it makes us feel better,” he said. “Isn’t it more scary to have to wrestle with the moral ambiguity of how we are supposed to treat each other and what systems we feed into? It is those systems of divestment and abuse of the full humanity of folks based on race that cause harm. Those systems are the ones that literally take people’s lives. If we reduce racism to individuals, all we care about are the souls of white people, instead of the lives of Black people.”

Next spring, Goff will teach a course tentatively titled “Is That Racist?,” which will be open to both undergraduates and graduate students.

“In this moment, this country is capable of — and law enforcement is open to listening to — a full articulation of a vision where police departments are held accountable for the burdens and the inequality they’ve produced,” said Goff.

Added Hinton: “Part of the reason this moment is so exciting is that we have a new opportunity to think about how we might divest from law enforcement measures and invest in programs that would allow us to conceive of public safety and crime prevention in ways that actually keep all Americans safer.”