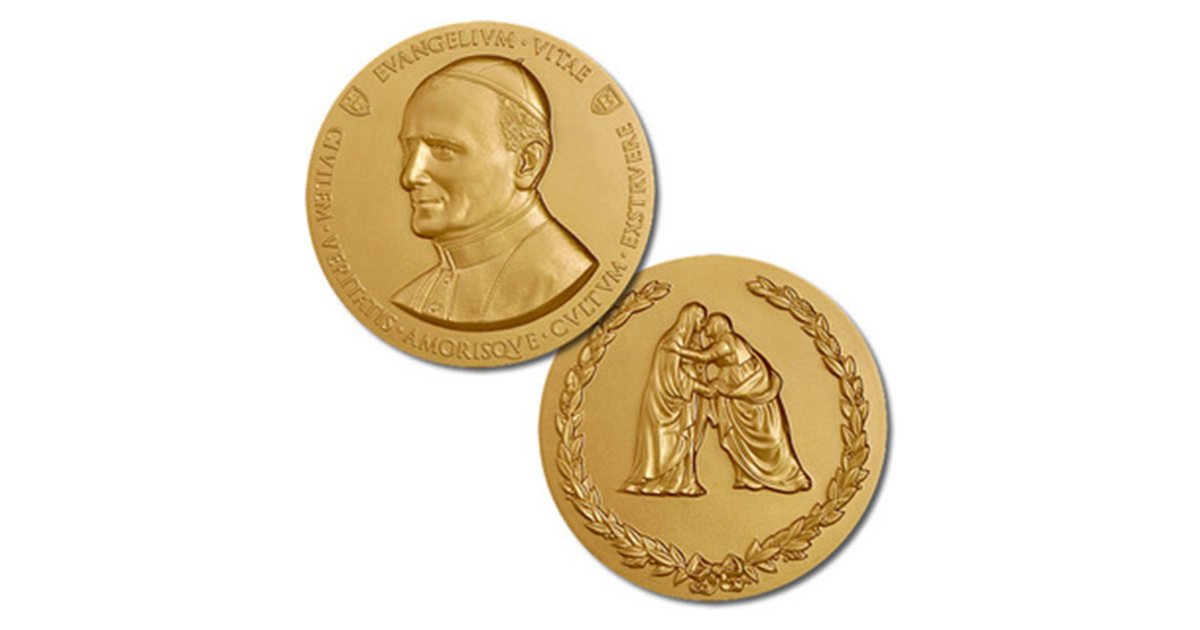 The de Nicola Center for Ethics and Culture at the University of Notre Dame will present the 2021 Notre Dame Evangelium Vitae Medal to Vicki Thorn, founder of the post-abortion healing ministry Project Rachel and executive director of the National Office of Post-Abortion Reconciliation and Healing, at a celebration on April 24.

“Vicki Thorn’s work is a living witness to the unconditional love and mercy that lies at the heart of the Culture of Life,” said O. Carter Snead, the director of the de Nicola Center for Ethics and Culture. “We originally wanted to honor Vicki this past April at a gala celebration gathered with hundreds of friends and champions of life, but the pandemic and associated safety protocols necessitated a postponement. We look forward to presenting her with the Notre Dame Evangelium Vitae Medal in 2021.”

“Vicki Thorn’s work has been a source of healing for women and men whose lives have been touched by abortion,” said University President Rev. John I. Jenkins, C.S.C. “I’m grateful to the de Nicola Center for Ethics and Culture for recognizing Ms. Thorn for her service to the Church and to the work of mercy on behalf of a Culture of Life.”

Thorn, a certified trauma counselor and spiritual director, started Project Rachel while working in the Respect Life Office of the Archdiocese of Milwaukee. Since the first training workshop for a small group of attendees in 1984, the ministry has expanded to the majority of dioceses across the United States and more than 25 countries around the world. Now overseen by the United States Conference of Catholic Bishops, Project Rachel is a diocesan-based network of specially trained priest confessors, mental health professionals, spiritual directors, medical professionals and others who provide ongoing, one-on-one, confidential post-abortion care.

Thorn is the author of “Progetto Rachele, il volto della compassione” (“Project Rachel, The Face of Compassion”), published in 2009 by Libreria Editrice Vaticana, and is an internationally acclaimed speaker on the effects of abortion on women, men and families. With her husband, William, she was inducted in 2008 into the Pontifical Equestrian Order of the Holy Sepulchre of Jerusalem. In 2009, she received the People of Life Award from the U.S. Conference of Catholic Bishops for her pro-life service to the Church, and in 2017, Pope Francis re-appointed her as a Corresponding Member of the Pontifical Academy for Life.

“Vicki not only championed the cause of post-abortion reconciliation and healing, she has lived to see it become an essential aspect of the Catholic Church’s pro-life ministry in the United States and around the world,” said Richard Doerflinger, retired associate director of the USCCB Secretariat of Pro-Life Activities and recipient of the inaugural Notre Dame Evangelium Vitae Medal. “Far from resting on her laurels, she is now a leader in showing how the Church’s vision of human sexuality is supported by the findings of medical science, helping young people to turn away from behaviors that lead to the tragedy of abortion.”

“In awarding Vicki Thorn the prestigious Evangelium Vitae Medal, Notre Dame recognizes her important service of the Gospel of life,” said Bishop Kevin C. Rhoades of the Diocese of Fort Wayne-South Bend. “She has helped thousands of women who have had an abortion to accept St. John Paul II’s invitation in Evangelium Vitae to ‘not give in to discouragement and not lose hope.’ Project Rachel reminds us all that the Gospel of Jesus, the Gospel of life, is also the Gospel of mercy. I offer sincere thanks to Vicki especially for assisting so many women and men to experience God’s love and forgiveness and to become, in the words of St. John Paul II, ‘eloquent defenders of the right to life.’”

“Vicki represents the kind of creative, brave, kind, tenacious woman who keeps the movement strong,” said Helen Alvaré, former spokesperson for the USCCB and recipient of the 2012 Notre Dame Evangelium Vitae Medal. Alvaré concluded, “She puts the ‘respect’ in the ‘Respect Life’ brand.”

The Notre Dame Evangelium Vitae Medal, named after Pope John Paul II’s 1995 encyclical on life issues, is the nation’s most important lifetime achievement award for heroes of the pro-life movement, honoring individuals whose efforts have served to proclaim the Gospel of Life by steadfastly affirming and defending the sanctity of human life from its earliest stages.

“The Evangelium Vitae Medal is a wonderful expression of Notre Dame’s deep and abiding commitment to the dignity of every human person, and is an expression of our vocation to build a culture of life,” said Rev. Gerry Olinger, C.S.C., the University’s vice president for mission engagement and Church affairs.

Previous recipients of the medal include the Women’s Care Center Foundation; Mother Agnes Mary Donovan and the Sisters of Life; Congressman Chris Smith, co-chair of the Bipartisan Congressional Pro-Life Caucus, and his wife, Marie Smith, director of the Parliamentary Network for Critical Issues; Supreme Knight Carl Anderson and the Knights of Columbus; the Little Sisters of the Poor; the Jerome Lejeune Foundation; and Mary Ann Glendon, professor of law at Harvard Law School.

Announced annually on Respect Life Sunday, the first Sunday of October, the Notre Dame Evangelium Vitae award consists of a specially commissioned medal and $10,000 prize, to be presented at a celebration that will be livestreamed from Notre Dame on April 24. For more information about the Evangelium Vitae Medal, visit ethicscenter.nd.edu/ev2021.

The de Nicola Center for Ethics and Culture is the leading center for scholarly reflection within the Catholic moral and intellectual tradition. The center is committed to sharing the richness of this tradition through teaching, research and dialogue, at the highest level and across a range of disciplines.