Researchers at Vanderbilt University Medical Center have identified a key factor that coordinates the body’s repair response to severe injury in the stomach caused, most commonly, by infection by the bacterium Helicobacter pylori.

Coordinating repair is a type of white blood cell called ILC2 (for group 2 innate lymphoid cell). ILC2s are involved in inflammatory disorders ranging from asthma to eczema. When activated by interleukin-33 (IL-33), an inflammatory signaling protein, ILC2s promote the reprogramming and repair of the epithelial cells that line the stomach.

Chronic damage and inflammation, however, can result in cellular changes — metaplasia — that increase the risk for gastric cancer, the third leading cause of cancer deaths worldwide. Understanding better how the stomach repairs itself could lead to new ways to detect and reverse precancerous metaplasia, the researchers concluded. 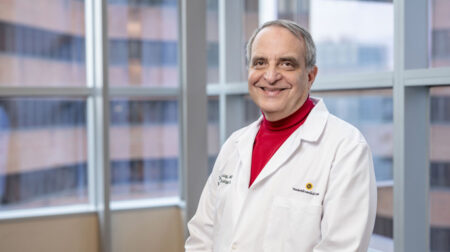 “These studies for the first time demonstrate that ILC2s, immune cells that are resident in the stomach mucosa, are orchestrating the complex changes that are required for repair of severe injury to the lining of the stomach,” said James Goldenring, MD, PhD, corresponding author of the study published earlier this month in the journal Gastroenterology.

Goldenring is the Paul W. Sanger Professor of Experimental Surgery and professor of Surgery and of Cell & Developmental Biology. He and his colleagues have developed mouse models of SPEM (spasmolytic polypeptide-expressing metaplasia) and intestinal metaplasia — processes that promote repair of injured stomach lining.

In the current study, the researchers determined that in the absence of ILC2s, processes that aid the repair of the stomach lining after injury are diminished. ILC2s increased significantly in stomach tissue following injury, but not in mice in which the gene for IL-33 had been deleted.

In samples of stomach tissue removed from patients treated for gastric cancer, the researchers also detected an accumulation of ILC2s associated with SPEM, further supporting the importance of ILC2s in coordinating the response to gastric injury.