In his newly released book, “Monk’s Notre Dame: People, Places and Events,” Notre Dame President Emeritus Rev. Edward “Monk” Malloy, C.S.C., offers readers a narrated tour of major University moments and leaders from the past half century. Rooted in the natural and built environments of Notre Dame’s iconic campus, “Monk’s Notre Dame” traverses material that is historical and personal as well as spiritual.

Father Malloy, who led the University from 1987 to 2005, recalls in the book’s introduction an old saying about Notre Dame and its leaders: “Their blood is in the bricks.” While this saying connotes a collective celebration of more than 175 years of individual contributions, Father Malloy also points to its sense of shared sacrifice and mission that grow from Notre Dame’s distinctiveness as a Catholic university. 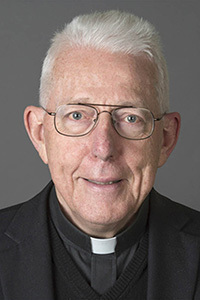 Moving to from people to place, Father Malloy chronicles the history of campus buildings and their deeply felt significance to the Notre Dame community — from the log cabin chapel of 1842, to Washington Hall and LaFortune Student Center (then Science Hall) in the 1880s, to the more recent academic and athletic building projects and the Charles B. Hayes Family Sculpture Park. He also curates a list of the top 10 most essential — and possibly most beautiful — Notre Dame buildings to visit on campus.The 17 Holy Cross priests who have served the University as president receive overview biographies, and Father Malloy notes that five of them were born outside the United States, four have been named John, many were from very large families and two each were surnamed Walsh, Cavanaugh and O’Donnell — though none were related. Father Malloy also profiles a number of Holy Cross priests and brothers currently in other positions of University leadership.

In recounting the many pivotal moments of Notre Dame’s history, Father Malloy includes the cholera outbreak in the 1850s, the fire that destroyed the Main Building in 1879, its reconstruction with the Blessed Virgin Mary atop the Golden Dome, the introductions of the football program and coeducation, President Rev. Theodore M. Hesburgh, C.S.C.’s role in advising American presidents and drafting the Land O’Lakes charter, and advances made by subsequent presidents in graduate education, research funding and the University’s global footprint.