What can TV ads tell us about partisan polarization? 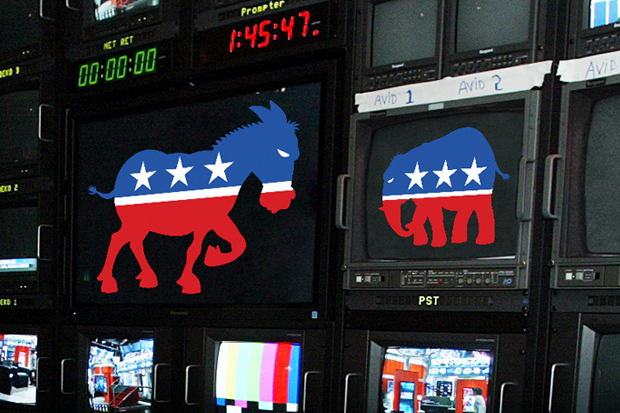 In the run-up to the presidential election, BrandeisNOW asked faculty to provide analysis and insight into some of the most pressing issues facing the country. This article is part of the series. Lucy Goodhart is a lecturer in international and global studies and politics.

The polarization of America’s political parties is one of the great issues of our age.  By any measure, Republicans and Democrats have become significantly more extreme since the 1970s. But explaining how this happened is hard. Political science has few if any plausible explanations.

Like many other scholars, I started with an interest in primaries. Where incumbents fear being challenged by true believers from inside their party, they will adopt more extreme positions to deter those challengers.

But my research looked at primaries from a new angle.

As congressional scholars can relate, elections for the House of Representatives often receive little publicity — primaries even less.

I looked at the cost of buying political TV ads, because TV is still the mechanism by which many candidates, including primary candidates, make their name known. Political ads mobilize voters. The costs, then, of fielding ads should help to explain when and where Representatives are more extreme because they have more to fear from primaries.

Painstakingly, and with support from Brandeis undergraduate research assistants, I compiled data on media costs by Congressional district for a 40-year period, from 1973 to 2012.

I was initially surprised by what I found. Republicans were more extreme when they were elected in districts with cheaper media markets. Democrats, on the other hand, were unaffected.

In addition, my analysis of political ads where that data is available indicates that TV ads are used more frequently in Republican campaigns and much more often by Republican primary challengers.

Based on this finding, I am now studying the different technologies used by Republicans and Democrats in mobilizing voters. If Republicans have turned to TV ads more, it helps explain why they are more extreme in more rural areas where ads are cheap.

In those places, Republicans face a higher risk of primary challenges. In response, they will take on more extreme positions. To win in the general election, despite those positions, they will use TV ads to mobilize the base.

My research is ongoing, but it’s exciting to consider polarization not as something inevitable, and entrenched, but as the result of campaign strategies that respond to local incentives. Ultimately, I hope this project contributes to our understanding of polarization so that we can have a more balanced picture of what it means for our society.