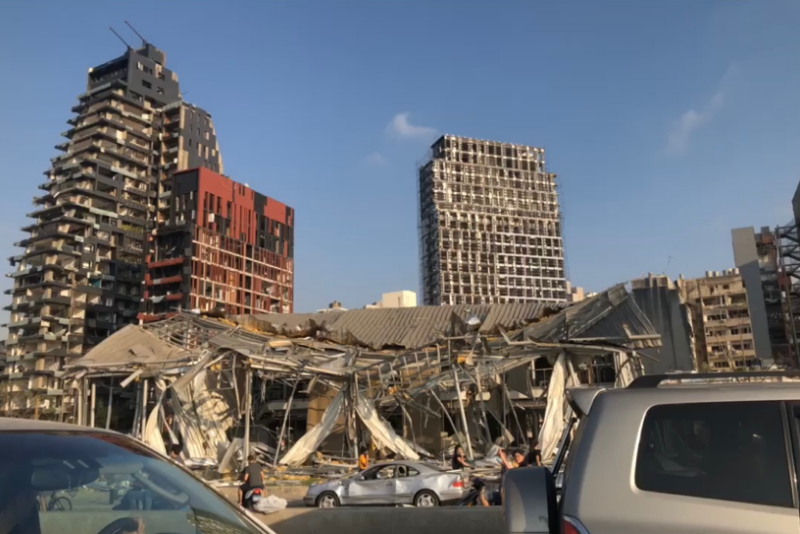 On Aug. 4, the third-largest non-nuclear blast the world has ever seen shook the city of Beirut, Lebanon. The city’s core was wiped out. Beirut was in shambles, leaving 300,000 people homeless in a city that was already struggling economically, politically, and socially — all during a global pandemic.

Thousands of injured people flooded Beirut’s hospitals. Adil, a Lebanese student who was in Boston during the blast, recalled his initial response to the news, “calling my parents to check up on them was my first instinct and every ring waiting for them to answer felt like an eternity, only to find out that my mother had been hurt. My world stopped.”

With hospitals in the capital severely damaged by the blast, medical personnel were struggling to tend to injured civilians while evacuating patients from structurally unsound areas. Amidst a pandemic, social distancing protocols were the least of people’s worries. Julian Maamari, a medical student in Beirut and brother of Daniella Maamari SM ’20, describes the traumatic experience, saying “as our hospital turned to rubble, it was our job to keep it a place of healing. Under the shock of the situation, feelings became a luxury. We could never have been mentally prepared for such a scenario, regardless of our medical training.”

All night, search parties combed through the rubble looking for survivors. Citizens of Beirut were advised to stay indoors to avoid a cloud of toxic gas, a remnant of the blast. With doors blown out of their frames and windows shattered over 10 kilometers away from the epicenter of the blast, for most, seeking shelter and a night’s rest was impossible.

Within days, thousands from all around the country flocked to the streets of the capital to aid those affected by the explosion. Basic amenities were unavailable; however, the people of Lebanese quickly came through with relief WhatsApp groups to distribute donations and set up volunteer stations to provide much-needed building assessment, surveying, reconstruction, cleaning services, and first-aid assistance.

MIT aeronautics and astronautics graduate student Jad Elmourad, visiting his family in Lebanon for the summer, recounts his experience: “We just walked around the city with brooms and bags, knocking on doors to see who needs help cleaning or moving broken furniture.”

As its main port turned to rubble, Lebanon, a small country that’s highly dependent on imports and has been experiencing inflation, struggled to sustain businesses and ran the risk of food insecurity. The Lebanese currency had already lost more than 60 percent of its value during the preceding year, and the prices of food staples, which had more than doubled in that same time, are expected to rise higher.

At MIT, the Lebanese Student Association and the Arab Alumni Association raised $30,000 as part of a fundraising campaign for the Beirut Emergency Fund. The money will provide shelter, medical assistance, basic needs, and reconstruction support for the thousands affected. “It was heartbreaking knowing I couldn’t be on the ground, supporting people. It was important to me that we find any way to help, and the MIT network really came through for Lebanon,” says Dana Dabbousi ’20, a member of the MIT Arab Alumni Association Board.

Eventually, the need for basic cleaning services and first-aid assistance had been taken care of. Elmourad, who went on to volunteer through his mother’s non-governmental organization (NGO), noted “helping wasn’t as easy as grabbing a broom and heading to the streets or homes, and many of us didn’t know how to contribute. It was time to move to the next phase of more serious repairs, but this required more organization.” Various NGOs and civil initiatives tried to organize the work to unify their efforts. The civil society spearheaded the relief efforts. Despite the lack of a centralized effort, much progress was made in building-damage assessments, reconstruction, and resource distribution.

Since the blast, more than 220 people have died, 6,500 have been injured, and four are still missing. In the context of a collapsing economy and ongoing revolution, the damages, estimated at $6 billion, are difficult to recuperate from. The country and its people are struggling to find calm amidst dire circumstances, hanging onto every glimmer of hope.

Miles away at MIT, the Lebanese Student Association and the Arab Alumni Association quickly responded to action and together as community committed themselves to helping Beirut rebuild from this devastating explosion. “It was heartwarming to see the way MIT’s community gathered around this cause and stood by the Lebanese people,” says Omar Kahil, graduate student in the MIT Sloan School of Management and president of the Lebanese Club. “The messages and support we received were overwhelming. Students, alumni, staff, and affiliates kept talking about Beirut and sharing the campaign that we hope served not only as a fundraising tool, but also an awareness campaign around the hardships Lebanon is facing. This helps fuel the Lebanese’s will to rebuild … and we will rebuild.”