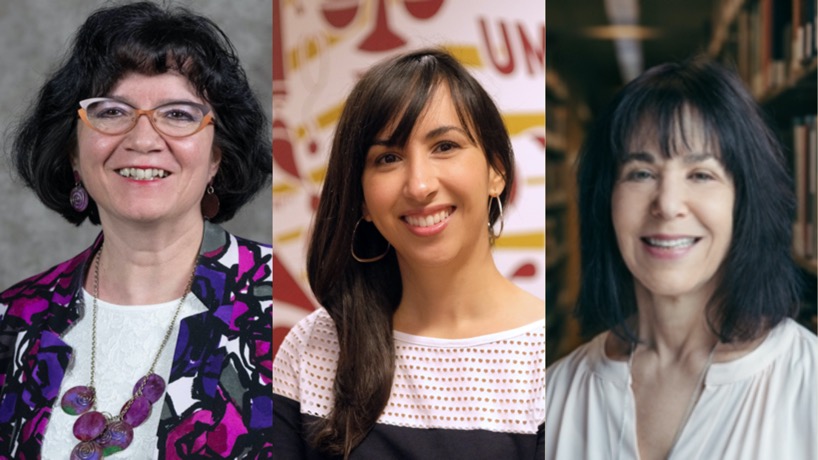 On Oct. 14, Provost and Executive Vice Chancellor for Academic Affairs Maria Mora, doctoral student Luimil Negrón and Associate Professor Deborah Cohen spoke on the panel “Race in the Latinx Community” to close out Hispanic Heritage Month programming at the University of Missouri–St. Louis.

Hispanic and Latinx peoples make up an increasingly large share of the United States population, about 18 percent in addition to the 3.2 million living in Puerto Rico.

That means they are an increasingly large contributor to the U.S. economy.

That’s just one reason to pay attention to Hispanic and Latinx populations, explained Marie Mora, provost and executive vice chancellor for academic affairs at the University of Missouri–St. Louis. The economist opened discussion during Wednesday’s “Race in the Latinx Community” panel event, which wrapped up the university’s Hispanic Heritage Month programming.

“One of the issues that I often bring up when I’m giving talks like this around the country is why the U.S. at large should care when we’re talking about the Hispanic or Latino population,” Mora said. “A part of this is realizing that what Hispanics are bringing to the U.S. has become increasingly important. So, essentially, that what’s happening within Hispanic populations is an increasingly important national issue.”

The event, which took place over Zoom, featured Mora and EdD candidate and PhD student Luimil Negrón as panelists and Deborah Cohen, associate professor of history and director of Latinx studies, as moderator. Vice Chancellor for Diversity, Equity and Inclusion Tanisha Stevens opened up the event.

Mora, a labor economist whose work has focused on the socioeconomic outcomes of Latinx peoples, minorities and women, started by contextualizing the discussion through the lens of her specialty. She pointed out the disproportionate effect that the coronavirus pandemic has had on the jobs of Hispanic and African American workers and introduced the topic of race versus ethnicity, a topic that’s especially present this year because of the U.S. Census.

That discussion encompassed the difficult question of how to categorize the diverse peoples from or descended from Spanish-speaking countries as well as the added complexity of self-identifying race.

Negrón – who is from Puerto Rico and says she identifies herself first by nationality rather than ethnicity – discussed the intricacies of jibing the lived experiences of Latinx peoples with easy categorization as well as the differences between attitudes in Puerto Rico and the mainland U.S. She noted that Latinx individuals with lighter skin can “pass” into privilege while those with dark features do not and shared experiences to make her point.

“Even in nuclear families, it’s like this,” she said. “I have my father, who looks like a conquistador. He absolutely does, and he carries white male privilege in Puerto Rico, until they hear him speak, but then people are like, ‘Oh, you’re European?’ But his brother is very dark complected, and his experience is completely different. How do you make sense of that?”

Mora, who has done research with a specific group of mestizaje self-identifying as Mexican American, found that those with darker complexions or native features had worse socio-economic outcomes on average in the U.S. and were less likely to have bank accounts.

“The longer-term outcomes, as a group of immigrants, is that they get settled into the U.S. with lower resources,” Mora said. “This is likely to lead to some of our intergenerational inequities that get carried over through time.”

Cohen noted the limited roles of Latinx characters: maid, gardener or those involved in the drug trade. Negrón pointed out that depictions often lack nuance, such as Sofía Vergara having to dye her blonde hair black for her role in “Modern Family” or the lack of Afro-Latino characters in the U.S.

Additionally, Latinx people are portrayed mostly as immigrants, which is increasingly more inaccurate when considering Puerto Rico – which is part of the U.S. – generations born in the states and those who became residents as a result of a border move.

Mora, who grew up in New Mexico and worked close to the Texas-Mexico border, recalled family members being concerned for her safety because of stereotypes about violence and high poverty rates in that area and being surprised by the reality upon visiting.

“What gets lost in that discussion, having lived along the U.S.-Mexico border for so long, is how heavily the U.S. depends on Mexico for trade,” she said. “Mexico is the U.S.’ largest trading partner. It makes a big difference in Texas in terms of, if we closed off trade, then we would have a big problem in some of the cities. In the city of McAllen, one-third of the retail sales taxes come from Mexican shoppers who cross the border.”

The three also addressed questions of education and opportunity.

Negrón, who is a former graduate assistant for Latino recruitment and retention in the College of Arts and Sciences, pointed out the challenges of language barriers for the family members of potential students, who then must navigate the application and financial processes alone.

There’s also the issue of low expectations, which prevent Latinx individuals from getting the same opportunities as peers, and low visibility for Latinx role models.

“If I could dream a better world, what I would imagine would be greater integration of Latinx history in the curriculum of K through 12,” Negrón said. “Latinx students need to be able to see themselves.”

Mental health resources and stigma, police and safety, the census, Latinx and Hispanic resources and organizations were among the other topics discussed.